When the artist Matthew Wong was just starting his painting practice, in 2013, he said in an interview that he had no fixed schedule for going about his work—with one exception. “The only thing that takes place at the same time every day is when I get out of bed, I have to do an ink drawing before doing anything else, such as brushing my teeth or eating,” Wong told the website Studio Critical. He sometimes experimented in a bathroom at his family’s Hong Kong home, he said later, “randomly pouring ink onto pages—smashing them together—hoping something interesting was going to come out of it.”

Wong kept making inventive ink drawings in the ensuing years, but it was his luminous oil paintings—vibrant, mysterious, melancholy landscapes—that would win him attention, and make him one of the signal artists of the decade. (Collectors now compete fiercely for them.) By the time Wong died in 2019, at 35, by suicide, he had created some 1,000 paintings and drawings. (His New York gallery, Karma, is readying a catalogue raisonné.) Only a fraction of that material has been seen publicly, and his ink works remain little known. However, that may be about to change.

On May 5, Cheim & Read will open an exhibition focused on Wong’s efforts in that unforgiving medium—just ink, water, and rice paper—at its Chelsea gallery, which it shuttered in 2019 and leased out, moving to the Upper East Side. “Matthew Wong: Footprints in the Wind, Ink Drawings 2013–2017” includes 24 pieces that have never before been exhibited. It’s a collaboration with the Matthew Wong Foundation, a nonprofit founded by the Toronto-born artist’s parents, Monita and Raymond Wong, to preserve his legacy and pursue philanthropic work. Its mission is currently being finalized. 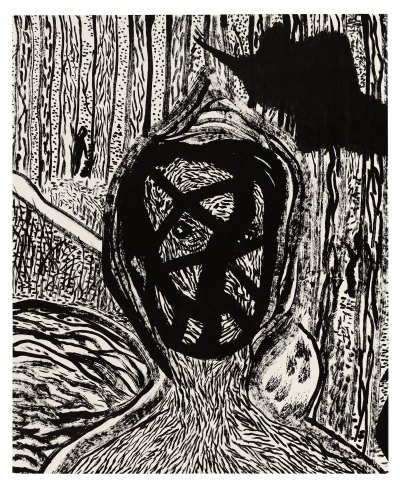 Wong famously honed his artistic approach in libraries and online—he maintained a blog, where he posted photos of some of the drawings in the upcoming show, and he liked to talk art on Facebook. That’s how John Cheim (Cheim & Read’s cofounder) first got to know him. “In 2015, Matthew and his mother Monita came to visit me in New York for the first time and brought along a tube of large black ink drawings,” Cheim said in an email. “Matthew was a striking presence—tall, handsome, a shock of black hair and large black eyeglasses, all carefully considered. I found the ink drawings to be singular, intense.” He bought one from the unknown artist, and they kept their conversations going.

As with Wong’s alluring oils, his ink works invite comparisons to some giant names while still being unmistakably his own. They have the swirling energy of a Charles Burchfield, the dense, hypnotic patterning of a Yayoi Kusama, and the uncanny eeriness of a Ralph Albert Blakelock. Without the presence of color, they help reveal how Wong built up his beguiling canvases. In The Watcher (2017), hundreds of quick, short lines radiate from a giant sun as an enigmatic bird perches atop a rock, one eye staring out of the picture. In an untitled 2015 forest scene, at least three figures may or may not be looming amid a virtuosic array of diverse marks. There is always a lot to take in.

Last year, Wong’s parents gave a sprawling ink 2016 work—more than six feet tall (and exhilarating even as a tiny digital image)—to the Metropolitan Museum of Art in New York. Suggesting a free-floating world within another world, it is potently surreal, and yet tender and intimate in the way it emerges from just simple brushstrokes: black liquid on white paper. “It is as if you can feel the particles in the air,” Cheim said of Wong’s ink works. “The space between the interior and the exterior dissolves—a kind of psychological pantheism presents itself.”

Previous articleBenin Bronzes Aren’t Safer in the West Than They Would Be in Nigeria, Academics Say
Next articleAncient Cave Painters May Have Experienced Hallucinations, Study Finds

Rocket man: Uli Sigg on how he began collecting art while working in North Korea

Rocket man: Uli Sigg on how he began collecting art while working in North Korea

An NFT of a drawing by Jean-Michel Basquiat has been withdrawn...
Read more

The Bavarian State Painting Collections, which is based in Munich...
Read more