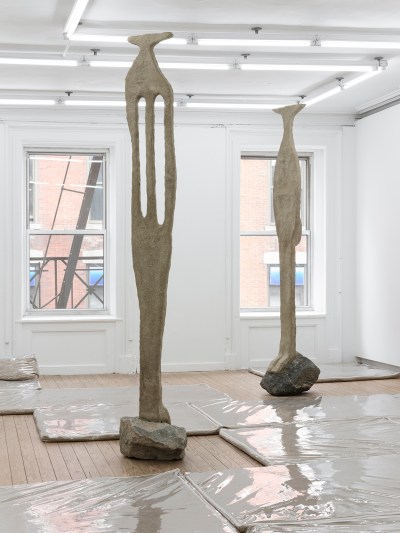 Transparent vinyl furniture covers filled with sand take up most of the gallery floor. Visitors are invited to take off their shoes and walk on the mats, or lounge on them. You can see all this condensation inside them that’s produced by moisture in the sand. The condensation is usually strongest in the morning, and then fades toward the evening, so the installation has its own kind of respiratory rhythm. Throughout my practice, I’m interested in the borders we create to avoid contagion, out of fear of the Other, and how the erosion of these boundaries is essential to erotic experiences. So in this piece, you’re walking on sand, but you’re also separated from it via this clear membrane; you don’t get dirty.

There are some obvious ways to understand this work in relation to the past year. But generally, my work explores architecture that’s designed to separate bodies, and asks what these designs say about our desires and our fears. Stalls (2020), which I showed at last year’s Armory Show, made reference to reception windows like those you’d see at a bank, as well as room dividers and bathroom stalls, which are designed to create barriers between people. Still, there are these details—like circular openings in the clear plexiglass—that suggest a longing to connect.

In a sense, the whole floor of the current show is modular seating; at the same time, it’s a contained landscape. Of course, there are also many cultures in which people relax on the floor. The furniture covers are meant to feel like readymades, but actually, I designed the shapes and sizes, then had an assistant make them using an industrial upholstery sewing machine. My design was very specific—the mats unzip on three sides, as if you could open up the lid to a sandbox.

I’m very interested in how architecture determines the way we do many things—the way we have sex, the way we eat, the way we sleep, how we protect ourselves. Three of the sculptures reference caryatids, which are those Greek columns shaped like women. I wanted to create the sense that the sand on the ground is being pulled up and into these bodies. To make the sculptures, I weld steel armatures after a lot of drawing and thinking. Then I cover them with chicken wire, then with some combination of polymer and burlap. After that, I start to slowly mix sand with polymer and burlap, working in thin layers in order to allow the sand to solidify. I found that if I pound dry sand on top of the mix when it’s only halfway dry, it creates this sandstone-like texture that appears to be crumbling, but in fact, it’s pretty sturdy. I usually work with sand as an ingredient in my pigmented plaster work, but for this show I developed a technique that enabled me to use sand as the primary material.

The caryatids suggest a sort of erect monument, but at the same time, the fragile-looking material evokes erosion and decay; eventually, the piece will crumble back to the ground. This means that, in a sense, the vinyl membranes are protecting sand from other sand. The figures are kind of perched on rocks. I borrowed the precarious position of the feet from an effigy on top of this medieval tomb that I came across in my research, though I’ve since realized the pose is pretty common. You’ll often see a statue of a body lying on top of a tomb, reminiscent of what’s inside. Frequently, the statue’s feet are placed on top of some stone object, like a pillow or an animal. I’m interested in how this position suggests neither a vertical nor horizontal figure, and how it’s a reminder of death and decay, of succumbing to gravity. The title of the show, “Lone and Level,” comes from an 1818 poem by Percy Bysshe Shelley titled “Ozymandias.” My husband is a poet; he came up with the name. It’s a Romantic poem about the transient nature of power and glory, and how everything will return to sand or dust.

—As told to Emily Watlington

In April, Germany made a landmark promise to begin returning the Benin Bronzes—thousands of...
Read more

In April, Germany made a landmark promise to begin returning the Benin...
Read more

On Wednesday, Mexico revealed that it had received 34 pre-Columbian artifacts...
Read more

An altar in a church in the German city...
Read more